Hi, my name is Morgan Errington (Al and Doris’s daughter). I have a great time up here; swimming, fishing, and watching the beauty of wildlife. I even like how my dogs interact with the wildlife. Especially our new puppy, Nikita, she is a German Shepherd/husky mix. 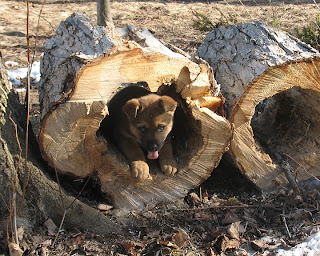 We adopted her from the pound 5 months after sadly, we had to put Tasha down(our 17 year old German Shepherd mix). Sable, our Siberian Husky seamed very gloomy the first couple of months, after seeing him like that, we decided that we needed to get him a little play mate. So we kept a eye on the pound and were watching if any puppies would show up, that were very young. There were a couple of nice puppies there, but just really didn’t fit in so well. Then a litter of about 10 pups came in, they were so adorable and were only 6 weeks old. So on the way into Sault Saint Marie, we stopped off at the Humane Society and were just melted by those little puppy faces. But their were three that we wanted the most, a big fluffy black and white fat one, one that looked like Nikita(shepherd looking), but was the runt, and Nikita. 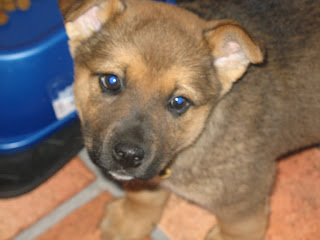 I picked up all the dogs and scratched out the runt because Nikita was really cute. Then as I held Nikita and my mom help the black and white one and as Nikita’s little face was buried in my shoulder and the black and white one just laying there, then as Nikita started licking my face, I knew Nikita was the one. When we took her home to Sable, we didn’t let them interact for the first day, just so that Nikita could get some rest. That night, I was in tears because Nikita was throwing up worms and blood everywhere and I thought she was going to die. It turned out that Nikita was passed on round worms through her mother as all her other litter mates got them to, so we went to the vet’s office and got her some pills. I was releaved that she didn’t have some type of disease that would kill her. So the next day we let Nikita and Sable interact a little bit and they were doing ok that day, and for a couple more days until Nikita got this thing where she wanted to bite ALL OF THE TIME, she would just keep on annoying Sable, it was funny how Sable reacted, but he would never ever try to kill her, but sometimes they rough play a little to much right now, but no dog gets hurt.

Nikita is now a healthy, nice and a very cute dog, she likes to tug and annoy sometimes, but she is a joy to have in the family.

I really loved your puppy, I even wish I could take her home with me, unfortunatley I coundn't.
During the day she would come over to our cabin for food and would come inside and lay infront of the nice, toasty and warm fire.
We enjoyed our stay very much.
Thank-you