Another Beautiful Walleye by Erik Born 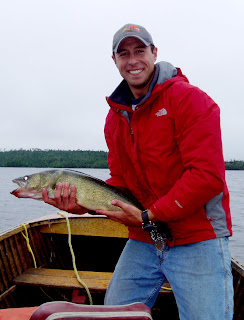 Erik Born did it again. He and his father Rick were supposed to fly out at 11:00 am but their float plane was delayed because of early morning fog, so they decided to fish for a few more hours. They did pretty well including releasing a 23 inch Walleye, Then, about 30 feet off the dock of their cabin, Erik tied into another big Walleye. This one faught very hard right off the bat and it took about 15 minutes to get in. It was another 28 inch Walleye, another really beautiful fish. Erik and Rick took this picture and quickly released it, then went and finished packing to come back to the lodge to catch the float plane home. Erik says it is just luck, being at the right place at the right time. Erik’s father Rick and I are not so sure, It takes a great feel and presentation to keep catching such great fish.