Greetings from Lake Wabatongushi! Summer is in full swing here at the resort. The atmosphere here has been absolutely delightful. We have had many guests come and go each one of them bringing their own flavor here to the resort. It’s been a pleasure getting to know each and every one of our guests.

We have been experiencing a trend here at the resort and that trend has been big fish. Boy, do I have some great catch and releases to talk about today. Hmmm… Where to begin? I think I will start off with the biggest catch and release of northern pike thus far. A big shout out to Mr. Kenneth Champagne for his 38.5″ pike. Way to go, Kenneth! So far you hold the title for largest pike caught this season. 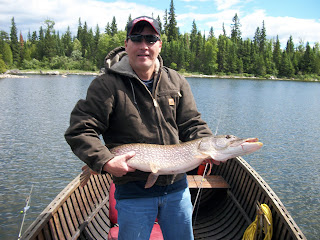 I would also like to mention Mr. Chris Champagne, Ken Champagne’s son, caught and released his first ever walleye here at Wilderness Island Resort. Chris caught a 26″ beauty. Check it out! 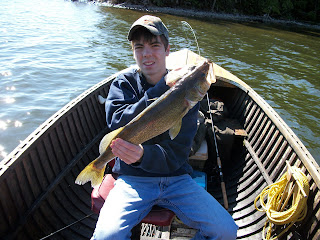 We have had some beautiful sized walleye caught over the past week as well. Mr. Doug Hoppa caught, and released a 24″ and a 28″ walleye during his stay here at Errington’s. I would also like to mention what a terrific singer and guitar player Doug is. Last week Doug held a coffee house for the staff here at the lodge. He played a wide variety of music anything from John Lennon, to Credence Clearwater Revival, to John Denver, to Van Morrison. Thank you Doug for a great night full of music and laughs.

Have you ever caught two fish on the same lure? Well, Jean Claude Morisset did just that. Jean was using a Hot’n’Tot that his friends grandmother, Mrs. Jaunita King, had given him and when he pulled up his line he found two perch hanging on to his Hot’n’Tot. Lucky catch, Jean Claude! 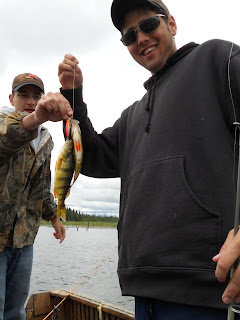 Well that is it from Lake Wabatong. I wish you well in all your fishing endeavors.

“I once gave up fishing. It was the most terrifying weekend of my life.”
Anon.