Revenge Is So Sweet 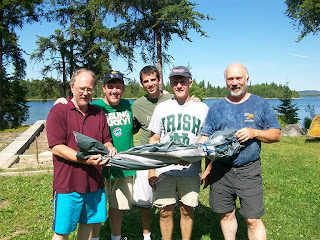 Mike Holden, a veteran of Errington’s for more than 15 years (shown in the picture next to Al Errington on the right) is a great fisherman and it seems an excellent liar as well. On a “slow fishing day” Mike and his brother Dan (not pictured) fooled his brother Tom, cousin Bob and son Peter (L to R) into believing he had found a “Hot Spot” by pulling the SAME Walleye into the boat every time he drifted past a particular tree.

Mike had his fun for two days until he arrived at Black Rock just in time to see his son Peter hook the biggest “Pike” in the lake. Peter and Bob struggled to land the 55” monster as Tom, Dan and Mike motored over to see the fish. As they drove over, Pete screamed to Bob, the net man, that the “Pike” was going under the boat, Mike put his boat in high gear and raced to help.

As they approached, Mike and Dan witnessed the netting of the monster pike from some distance and saw the tail flap in the air as Bob and Peter tried their best to avoid the thrashing monster’s teeth. Mike later said that his biggest concern that the “Pike” would take a finger from son Peter and ruin his career as a dentist.

After a few minutes of frantic struggle, Mike and Dan arrived to get a glimpse of the giant. They threw a tape into the boat to measure it as Peter straddled the beast and Bob tried to remove the hook. Mike pleaded to see the fish shouting instructions as to how it should be held and that’s when Tom, Pete and Bob knew…

They had caught two bigger fish… Mike and Dan went for it “hook line and sinker.”

Peter pulled the “fish” you see in the picture from the bottom of the boat while Tom snapped pictures of Dan and Mike. The “Pike” was made from an old BBQ grill cover provided by Al who, it should be noted, provides ALL your fishing needs, including the makings for a giant, monster FAKE pike! This was so well played that Mike saw the tarp and though “That was smart, they wrapped the Pike in a tarp so it could not bite them. Where did they get the tarp?”

This round goes to Tom, Pete and Bob, but Danny and Mike will certainly not let this be the last word on lies told at Wabatongushi!