Greetings from Lake Wabatongushi! I am very thrilled to write this post for you all today. I will be sharing some very interesting information on one of my absolutely favourite wild animals, the moose.

The moose, scientific name Alces alces, is the biggest member of the deer family. The mighty moose can be found in canadian forests from the boundaries of Alaska to the eastern tip of Newfoundland and Labrador.

Although feared because of their great size, moose are shy,timid animals. Their colouration varies from dark brown, to reddish brown or grayish brown with gray or white leg stockings. A male bull moose can weigh upwards to 600kg, while females weigh in at around 400kg. The Alaskan-Yukon sub species can weigh up to 800kg!

How can you tell a male moose from a female moose? Well, mature male moose carry a rack of antlers, and also have a large ‘bell’ that hangs from under their chin. Females also have a ‘bell’ but it is smaller than a males. Also females have a white vulva patch on their hind end. 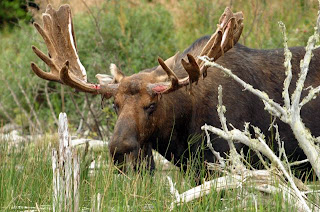 Antlers will begin to grow during the months of July and August. During this time the antlers are soft, spongy, and covered in velvet. By early September their antlers are fully developed and are hard. The velvet begins to dry and the moose will begin to rub their antlers on the trunks of trees to remove the velvet. A bull calf will develop its first set of antlers within its first year of life. A mature moose will shed its antlers in November while younger bulls may carry their antlers through the winter months. 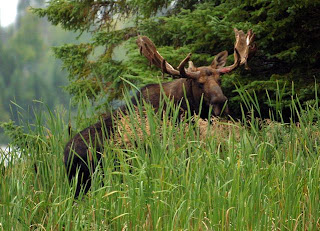 A successful breeding season depends on whether there was a good food supply that year. Moose breeding season, also known as ‘the rut’ begins mid-September. This is a dangerous time because male moose will fight for the right to breed with a female. Sometimes a male moose can die from injuries sustained in a fight. The calf moose will stay with its mother until she calves again the following spring. The cow will then drive off the previous years calf.

During the summer moose feed on leaves, water plants, and upland plants as well. During the summer season a moose will eat 25 to 30 kg of food. Once winter comes around their diet changes to twigs,and shrubs from Balsam fir, poplars, birch, willow, and maples. When food becomes scarace the moose will then strip the bark from trees. 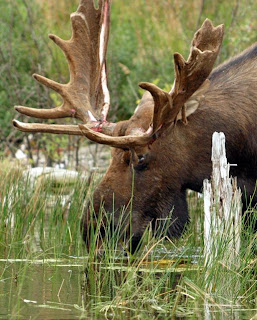 The main predator for moose are bears and wolves.

The meningial worm, a deadly parasite, attacks the membrane surrounding the brain and spinal cord of the moose.Areas where moose and white-tailed deer co-exists are the hardest hit by this parasite. Signs and symptoms include rear leg weakness, lameness, paralysis, circling, abnormal head tilting, blindness, and an inability to eat.

I hope this was an informative for you. Thank you for taking the time to read our blog. Have a great day!