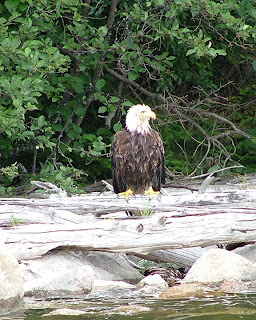 This Bald Eagle is probably as disgusted as she looks, and yes, she is all wet. Bald Eagles are considered fish eagles but unlike Osprey they only go into the water by mistake when they miscalculate how deep or how big a fish is that they have targeted to pluck out of the water and end up swimming.
This Bald Eagle was seen just inside Dibben Bay by Bob and Rennee Gall. It had probably just gotten out of the water from a long swim to shore after missing a basking Northern Pike. Bald Eagles are not very good swimmers, no actually they are very bad swimmers. Although they float pretty well and are generally not in danger during their unplanned dips, their feathers can soak up a lot of water. This eagle stayed on the shore for a couple of hours drying out and resting. 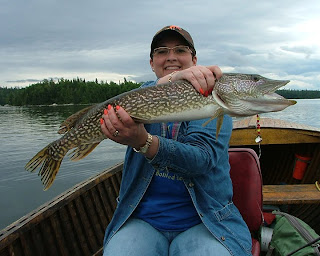 Rennee Gall was much happier and successful than the Bald Eagle she photographed with this 32 inch Northern Pike she caught & released fishing in Dibben Bay.