Greetings from Lake Wabatongushi! I have another informative post for you today. I thought I would keep with my wildlife theme and talk to you about the Osprey.

The osprey is a large raptor that feeds mainly on fish. Because of it’s diet you will find this bird close to rivers, lakes, and coastlines. The osprey can be found on all the continents except for Antarctica. 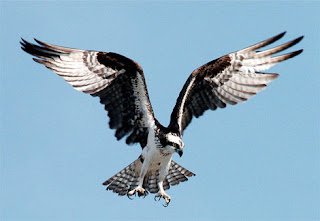 The osprey is the only raptor that plunges into the water. They can reach depths of 1 to 2 meters which is pretty impressive I must say. They will hover over the water scoping out their prey then plunge down feet first to grab the fish with their talons.

You will recognize this bird of prey by it’s brownish-black upper body and white head cap. While flying above, the osprey can be distinguished by it’s black ‘wrist patches’ and white underbelly. The osprey is a large bird with a wingspan of 4 to 6 feet in width. 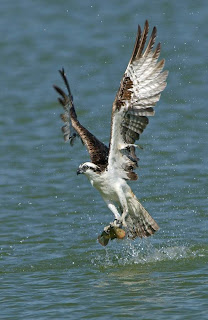 Males and females look a lot alike however males tend to appear slimmer than the females and have narrower wings.

Before the colder weather appears, the osprey migrates to South America where it spends the winter months.

What a very beautiful bird. Here at Lake Wabatong we are fortunate enough to have osprey living among us.

That’s it for me. Have yourself a great day!

“I feel like I’m nothing without wildlife. They are the stars. I feel awkward without them.”
Bindi Irwin