Night Sky in Canada and Astronomy

Greetings from Lake Wabatongushi! I wanted to take the opportunity to tell you about the meteor showers that we are expecting over the next two nights.

The Southern Delta Aquarids Meteor Shower takes place over the course of two days, July 28th, and 29th, and is best viewed from the east after midnight during the pre-dawn hours. The delta aquarids averages between 15 to 20 meteors per hour and at its peak produces 18 meteors per hour. 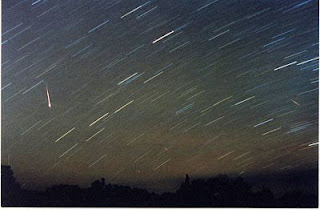 Other events to keep in mind is the Perseids Meteor shower which takes place over two days August 12,and 13, and is said to be one of the best for viewing meteors.

On August 13th comes the triple alignment of Venus, Mars, and Saturn. The three planets will align themselves with the crescent moon. Just after the sun sets look to the west to view this spectacular scene.

On August 20th Neptune will be visible by telescope and will appear as a tiny, blue dot in the sky. This is the closest that Neptune will get to planet earth and is the best time to view the planet.

That’s it for me! I hope you are able to find the time to enjoy this wonderful phenomenon.

So go set your alarm, and dig out your sleeping bag. This is a show you don’t want to miss 🙂 Happy stargazing!