Long time guest Tom Quaderer brought his future son-in-law John with him last spring, sort of a pre-welcome to the family and bonding with the future husband of his daughter. They bonded great on this 32 inch Walleye they caught in the evening off of Campsite Island. It was getting dark and they had had a good day of Walleye fishing but they decided to take one more turn with their rapalas along the shore before heading in. John hooked into this 32″ Walleye. This was very streesful for Tom because missing on the net for his future Son-inLaw’s Trophy Walleye does not set a good precedent in a relationship, and this Walleye was not coming in easy. But Tom got a good scoop on the net, and they laid it out and stared at it in either exhaustion or shock, they were not sure which, but they were very happy. They measured her, took a quick picture, and returned her to the lake to contribute to future fishing. A 32 inch Walleye around here is about 31 years old and a prime spawning female according to our Walleye/Pike Fish Size/Age Chart. 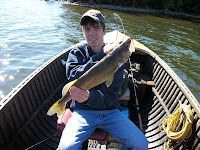 A couple of days earlier Ken’s son Chris Caught and released this 26 inch Walleye, the first and largest Walleye Chis has ever caught.

Here are the largest Walleye and Northern Pike Caught and Released by our guests fishing at our resort in our 2010 fishing season. It is great to see all these trophy fish going back after some great fights and quick pictures. The biggest walleye and pike are the really prime spawners so retuning them too back to Lake Wabatongushi enures great fishing for future vacations.

For more information on Fish maturity and spawning ages go to our Walleye & Northern Pike Fish Age-Size and Male/Female Ratio Chart in our website at: https://wildernessisland.com/WalleyePikeAgeSize.php.

For this draw we separate all entries into their respective weeks, draw 2 entries from each week, all remaining entries for the year are combined and we draw the balance of the winners from the remaining entries. We thank everyone who contributed to the ongoing fishing quality of Lake Wabatongushi.